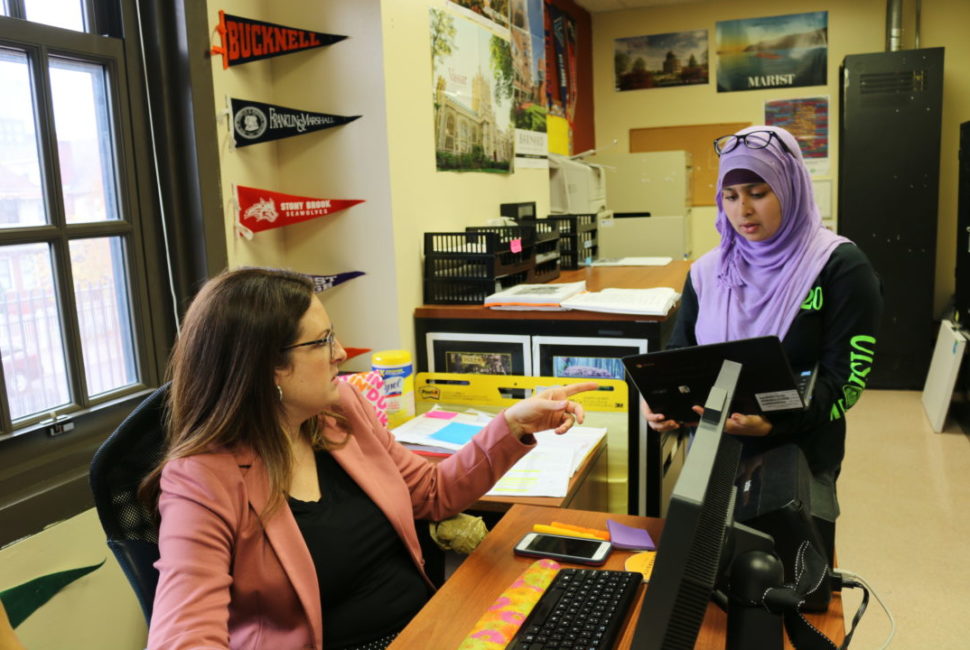 Sumayya Mokit, a senior at The Young Women’s Leadership School of Queens, works two jobs after school and babysits a younger sibling on top of balancing homework. She’s also managed to wedge in time for her college applications.

On a recent Wednesday during lunchtime, Sumayya, the daughter of Bangladeshi immigrants, worked on her early-decision application for Barnard College in the office of her college counselor, Jessica Kane.

“I have my heart set on [Barnard],” said Sumayya, who wants to become the first person in her family to earn a U.S. college degree. She’s hoping the transition to a small women’s college might be smoother since she attends a tight-knit all-girls school. Nearby, six of her classmates worked on their own applications, eating cafeteria food as they did.

Unlike a typical guidance counselor, who is tasked with juggling multiple aspects of a student’s academic life and social and emotional needs, Kane is laser-focused on college. Asking students to fill out extensive questionnaires about their interests — as well as their financial, cultural, and logistical realities, like whether they have a car and if they can attend school out of New York City — she works to ensure that every young woman who wants to go to college gets in and understands the path to finance their education.

Kane provides guidance for many students whose parents are “driving for Uber or working two to three jobs,” she said. They have little time to help with the application process, sift through financial aid information, advise them on how to network with college administrators, or brainstorm what to say in a pre-interview email — or even to know that they should send an email, she added.

As Sumayya worked in her office, Kane reminded her to send a follow-up note to a Barnard official that she’d been chatting with about the school’s programs and facilities that she likes.

“Express some type of emotion, engage in some sort of gratitude,” Kane advised.

She’s been at the school since July 2017, thanks to a program called CollegeBound Initiative, or CBI, which partners with 31 city schools, including New York’s five The Young Women’s Leadership schools (also known as TYWLS) to expose students as young as sixth grade to the idea of college. The Jamaica, Queens school has partnered with CBI since the school opened in 2005, Kane said.

Other students at the school, which serves just over 300 students in grades six through 12, said Kane stays on top of them in similar ways — and not just during the application process. She even keeps in touch with students once they’ve started college.

Her job isn’t easy. More than 70% of the students at the all-girls school last year came from low-income families. Many of them are from immigrant households, and some are undocumented, meaning that until this year they could not apply for state financial assistance. Plenty of them are the first in their families to navigate the college admissions process, Kane said.

The odds often seem to be stacked against such students. One snapshot showed that citywide, only about a third of students from low-income families who enrolled in high school in 2003 completed college a decade later. That’s compared to 52% of students who came from families who earned at least $20,000 more.

Yet TYWLS in Queens has one of the highest rates of in-state college completion among New York City high schools serving large shares of low-income students. Some 79% of students who graduated from the school in 2013 and received state tuition assistance completed college in New York State within five years, according to a recent data analysis by Education Trust New York, an education advocacy group. (The data does not include students who attended college out of state.)

Other studies have found that students can benefit from having targeted college counseling. A 2017 paper that looked at one college-advising model found that students receiving guidance on their applications and check-ins after high school were “substantially” more likely to make it through college than those who didn’t.

But “this moment of going to college is what a lot of families immigrated here for,” she said. “I try to remember that when things get really hard.”

Schools pay for the CBI program through their own budgets, grants, or through funding provided by the city’s College Access For All program, which boosts resources dedicated to college awareness.

There are about 1,500 counselors at city high schools, but education department officials did not specify how many of those are, like Kane, specifically college counselors. As of 2017, about half of city high schools were participating in College Access For All, indicating that there was some enhanced focus on college at those buildings.

“I call her my school mom,” one student said of Kane.

The same afternoon that Sumayya worked on her Barnard application, Kane helped another student on her personal statement, which was due in 48 hours. The student massaged her temples and closed her eyes.

“We could make this so much more about you,” Kane said. “Let’s think of things we can elaborate on with this — together.”

A group of other students sat at an oval table near Kane’s desk as they finished up early applications for schools, such as the University of Virginia and NYU. They casually threw around the alphabet soup of college acronyms, referring to the federal financial aid application, FAFSA; the state tuition assistance program, or TAP, and a program, known as HEOP, whereby students who were previously rejected from a school get a second look.

Kane urges her students to consider schools that partner with HEOP, formally known as the Higher Education Opportunity Program. Students admitted through this competitive program have access to extra support, such as a pre-freshman summer program, counseling and tutoring, and remedial, developmental, and supportive courses.

“When I do check-ins, my kids in HEOP are doing so much better,” she said.

Kane believes that many TYWLS Queens students remain in college because of the work they do in choosing schools, and she encourages students to attend smaller ones if they are open to it. Those places tend to have tight-knit communities that can help students feel more at home and, therefore, be less likely to leave, she said. She takes students on college visits and recently traveled with them to Skidmore College in Saratoga Springs, where they saw the dorm of a former student.

“This is what we worked so hard for,” Kane said.

Back in Queens, where the students worked on their applications, a frame sat perched in Kane’s office. “Operation: Fairy Godmother,” it read. Kane shrugged off the moniker, saying it was just a gift. But one of her students begged to differ, chiming in, “Because she makes dreams come true.”