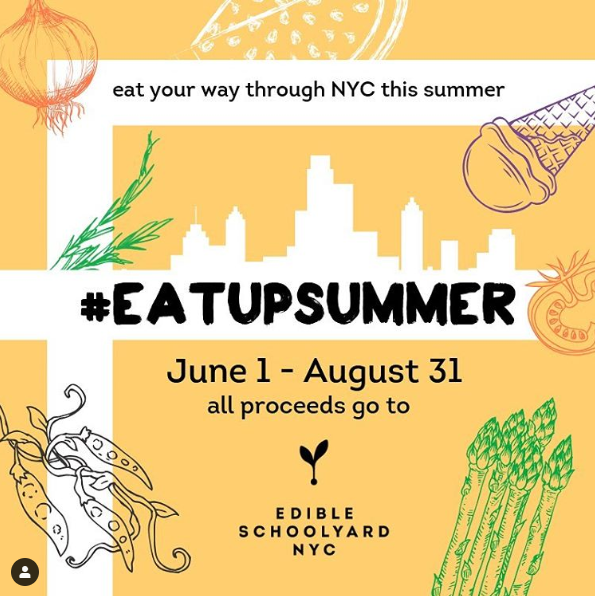 Summer is only a few weeks away, and in New York, that means flocking to restaurants with outdoor spaces, taking long lunches on Fridays, and crowding local ice cream shops until lines form along the block. However, it also marks the launch of Edible Schoolyard NYC’s annual summer fundraising campaign—and if you’re strategic about where you dine, you can enjoy a great meal out while helping support food education programs for the city’s public schools. The organization, which uses hands-on education to help young New Yorkers make healthy food choices, partners with several restaurants each year for their #EatUpSummer campaign—proceeds from certain menu items will be donated to Edible Schoolyard. This year’s roster is pretty enticing, too: Atla, Momofuku Ssäm Bar, Morgenstern’s Finest Ice Cream, The Odeon, Cervo’s, and more are participating.

Some of the restaurants and bars have deals that last all summer—for example, Morgenstern’s Finest Ice Cream (home of the famed black ice cream made with charcoal), will donate $1 from every cup and cone of the “Edible Schooyard NYC Mint Chip” flavor sold. Meanwhile, The Smith is donating proceeds from its strawberries and cream dessert, while The Odeon, Cafe Cluny, and Cafe Luxembourg will donate sales from breakfast bowls, per the Edible Schoolyard site. And Two Hands is participating too, donating proceeds from their brassicas bowl—a combination of charred broccolini, brussels sprouts, kale, hummus, soft-boiled egg, avocado, pickled shallots, buzz chilli, and seeds.

From June 17 through 19, Enrique Olvera’s Atla will donate proceeds from the mushrooms en salsa roja dish; or, order the seasonal sorbet from sister restaurant Cosme. Momofuku Ssäm Bar will donate $1 for every glazed St. Louis ribs and spring white truffles and fried cauliflower dish sold all month, and seafood restaurant Cervo’s will donate 100 percent of proceeds from a “special seasonal dish” between June 21 and June 28. There aren’t as many July deals on the calendar, but they all involve drinks—$1 from every beer sold at The Gumbo Bros will be donated, and $1 from every glass of rosé sold will also go to Edible Schoolyard, from Bar Sardine, Jeffrey’s Grocery, Joseph Leonard, Fairfax or Fedora.

The campaign officially begins on June 1, and ends August 31. For the full list of restaurants participating and the schedule, you can head to Edible Schoolyard’s site.

Overcoming life’s basic truth: Talent is universal, but opportunity is …

All New York City kindergarteners and first graders will receive …