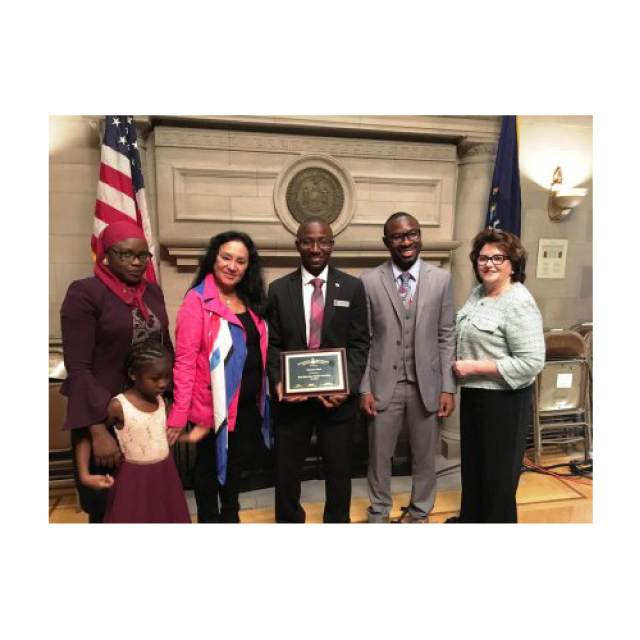 The New York State Board of Regents honors Alhassan Susso of International Community High School in the Bronx with the State’s 2019 Teacher of the Year award!

For the first time in 20 years, a New York City public schools teacher has been named New York State’s 2019 Teacher of the Year.

Alhassan Susso, a social studies teacher from International Community High School in the Bronx, was honored with the award by the New York State Board of Regents for his extraordinary work and passion on behalf of his students.

Susso, who immigrated to the U.S. from Gambia when he was 16 years old, has been teaching at International Community High School since 2012. In 2017, he was named one of the Top 50 Outstanding Educators in the World by the Varkey Foundation’s Global Teacher Prize, and he also received the 2018 Social-Emotional Learning Innovation Award for Teachers through the Rockefeller Foundation.

“Alhassan Susso has overcome obstacles that might have forced other people to give up—emigrating to the United States at age 16 and living with a rare, degenerative eye disease—instead, he chose to devote his life to helping young people,” Dr. Rosa said when she presented the State’s award. “Every day, he focuses on making the school-community connection that is critical to educating the whole child. From being named one of the top 50 educators in the world, to now being the 2019 Teacher of the Year, Alhassan has earned each of the prestigious awards he has received. I’m proud to honor this Bronx teacher as the Teacher of the Year.”

On behalf of the NYC Department of Education, Chancellor Richard Carranza later added, “Alhassan Susso exemplifies the dedication and passion of our 79,000 NYC teachers. Using the obstacles he’s overcome and lessons he’s learned in his own life, he has changed the trajectory of students’ lives & helped them pursue their dreams. I thank him for his extraordinary work and for bringing out the best in our children every single day.”

Going forward, Susso will serve as an ambassador for teachers throughout the State, and he will also be New York State’s nominee for National Teacher of the Year.

To learn more about the 2019 Teacher of the Year award, check out the New York State Education Department’s press release,

On behalf of the DOE, we thank the State Board of Regents and congratulate Mr. Susso for this incredible honor!

Overcoming life’s basic truth: Talent is universal, but opportunity is …